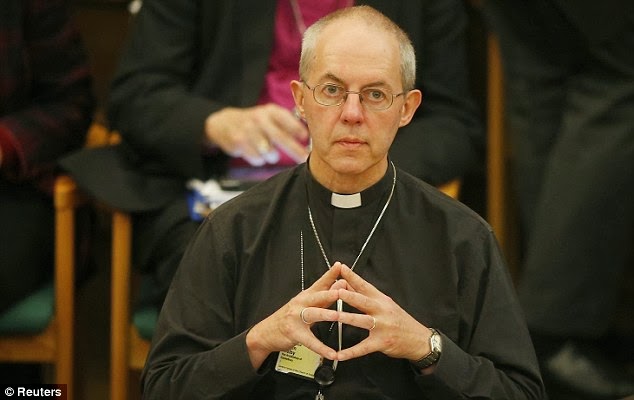 Holy Saturia!!! Abomination of the century!! what is this world turning into?!!

According to Daily mail,

The Catholic church of England Announced yesterday Gay couples should be allowed to have their relationships blessed in church.

A report, written by former civil servant Sir Joseph Pilling and a team of senior churchmen and women, may now open the way for a reversal of the Church of England's opposition to same-sex marriage and the eventual appointment of actively homosexual priests and bishops.

The report stated that Bishops should lift their official ban on ceremonies to mark civil partnerships and the relationships of gay and lesbian churchgoers.
It signalled an end to the Church’s longstanding insistence that gay relationships are sinful and less worthy than heterosexual marriage.

Current CofE guidance laid down by bishops forbids priests to conduct same-sex blessing services. Nevertheless, some estimates say 200 such services a year are carried out in Anglican churches.

Bishops could permit gay blessing services simply by changing their guidelines. Their first opportunity to do so will come at meetings next month and in January.

The Pilling report calls for two years of ‘facilitated conversations’ on a series of ideas that will sweep away the decades of opposition to gay rights if a majority in the Church accept them.The row over gay bishops has been toxic for the Anglicans since the last Archbishop of Canterbury, Lord Williams, prevented the appointment of openly gay Canon Jeffery John as a bishop in 2003. Dr John is now Dean of St Albans.