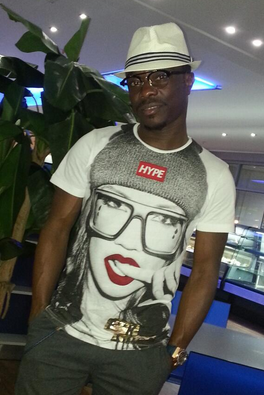 According to a press release by Celebrity Nigerian lawyer, Festus Keyamo,Comedian Julius Agwu has filed a N100 million lawsuit against Telecoms giant, Etisalat for blocking his business line. Agwu is demanding for N100million as compensation for jobs lost, contact lost, for the inconveniences, and for being mistreated by Etisalat staff. Festus is his lawyer.

See the Press statement below...


We are solicitors to Mr. Julius Agwu, one of Nigeria's most sought after entertainers (hereinafter referred to as "our client") and on whose behalf we write.

Our client is the owner of the Etisalat GSM phone number 08189555555, which he uses as his business line. On the 8th of October, 2013, our client travelled out of the country and returned on the 17th of the same month. Upon his return, he tried severally to make calls from the aforestated GSM line but same could not connect.
Not only could he not make calls, he also could not receive calls on the said GSM line. This continued for some days until he got a message that his line had been blocked by the network provider.


Sequel to the above message, our client promptly visited your Abuja office at Hilton to report the matter. He was attended to by one Miss Joan, who informed him that somebody swapped his line. After our client successfully answered the security questions put to him, he was informed that his line had been restored, but the credit balance on the line was not returned.
Surprisingly, our client's aforestated line was blocked again after he left your said Abuja office. Once again our client visited your office at the local wing of the Murtala Mohammed International Airport Ikeja, Lagos to lodge a complaint, but painfully, nothing was done about it.
However, after sometime, our client was invited for a meeting at your head office in Lagos on the 14th of November, 2013 which he duly honoured. Present at the meeting (in addition to the officials of your organization) was Mr. Mobolaji Okusaga, the Managing Director of The Quadrant Company, in his capacity as media agents/managers for Etisalat Nigeria.
At the end of the meeting, our client was told for the umpteenth time that they would get back to him, which they again failed to do.

LOSS OF BUSINESS OPPORTUNITIES
It cannot be over emphasized that your actions of unlawfully blocking and/or swapping our client's line occasioned loss of business opportunities to him. As you are aware, our client as one of the most sought after Nigerian entertainers needs his phone line to be easily accessible to keep his business going. It therefore goes without saying that our client has lost some business opportunities as a result of your actions.

TAKE NOTICE that we have our client's firm instruction to demand and hereby demand the sum of N100,000,000.00 (One Hundred Million Naira) as compensation for the loss of business opportunities and the inconvenience caused our client by reason of your unlawful and unjustified blocking and/or swapping of our client's Etisalat GSM phone line.

TAKE FURTHER NOTICE that in the event that you fail, refuse or neglect to accede to our above stated demand within seven (7) days from the receipt of this letter, we shall be compelled to set in motion against you, all legal machineries necessary to obtain legal remedy for our client.
Thank you.
Yours sincerely,
FESTUS KEYAMO, ESQ.