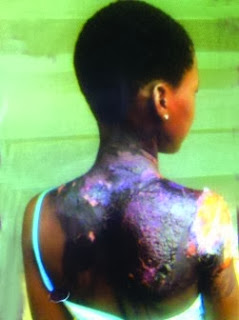 This lady should be seriously dealt with...no matter what happened...why would you pour scalding hot water on another person's child?....and she is a pastor's wife?....pastor's wife my toes!

The police at Idimu, Lagos, have arrested the wife of a pastor, Mrs. Angela Uzoma, for pouring hot water on her sister.

The 28-year old housewife who is also the women’s leader in her husband’s ministry at Shasha allegedly poured hot water on Chidinma Chukwu, causing her serious injury because the 14-year old Chidinma sold only few pawpaws she was to hawk on the fateful day.

The incident happened at their residence at Ifelodun Street Orisunmbare, Shasha, Lagos State.According to PMNews, Angela had warned Chidinma to ensure that she did not come back home without selling all the pawpaws packed in her tray for sale that day.
Unfortunately, Chidinma did not sell everything and Angela became angry, accusing her of being too playful.

After Angela burnt her sister, she tried to hide the incident by refusing to take her to a hospital. Instead, she arranged with a nurse who was treating Chidinma at home.
But the matter came into the open when a samaritan heard of it and reported to the police at Idimu.

Narrating what happened, Angela told P.M.NEWS at the police station that she did not intentionally pour water on her, adding that she brought her from the village to train her and she was hawking pawpaw to assist the family to feed.

“It is the devil’s work and I regret what happened. I want to settle this matter out of court,” she begged.

Her husband, Pastor Paul Uzoma, described the incident as unfortunate.

“When I heard of it, I blamed my wife and told her she went too far,” he said.

He, however, said his wife meant well for the girl and that was why she brought her to Lagos to train her.