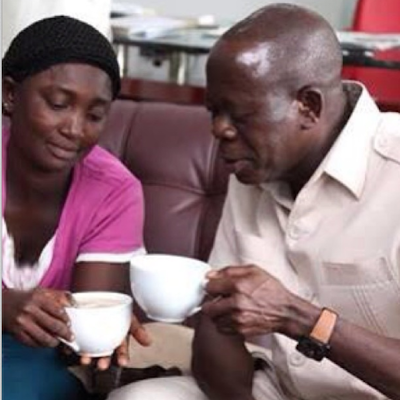 Governor Adams Oshiomhole of Edo State, on Monday donated N2 million to Joy Ifije, the widow he insulted while on an inspection tour of the state.Mrs Ifije, who was invited to the Edo Government House by the governor, was also offered automatic employment by Mr Oshiomhole.

The governor had invited the widow to personally apologise to her over his uncomplimentary remark that had generated controversies in the conventional and social media in the last few weeks.
Even opposition party Peoples Democratic Party (PDP) in the state capitalised on the sentiments by donating N250,000 to the widow.

“Let me apologise to you for the way I spoke to you, I am very sorry about the statement. I have also realised that even in anger, one could still achieve the same result that he set out to without provocative outburst. I apologise from the bottom of my heart, but sometimes you get angry when people compromise your efforts.’’

He said that government was trying to change the face of the state capital by doing its best to make the city beautiful; adding that it was frustrating and bad for some people to truncate government efforts.

He stressed that trading on the road and walk ways could hinder free flow of traffic as well as cause accidents. He, therefore, appealed to the widow to join in the campaign against road and walkways trading.

The governor said that exposing consumables to unhygienic sanitary conditions could also cause ”disease and pose dangerous health hazards to humans”.

Mr Oshiomhole, who also announced the automatic employment to the widow, said that the employment would help her ease the burden of widowhood and give her children good and proper education.

He further assured the widow that his family would assist the widow’s second child in furthering his education, while also appealing to her to resist the temptation of law breaking.

Mrs Ifije had earlier apologised to the governor for her action. “I know I was wrong, that was why I quickly knelt down to beg when I realised I was face to face with the governor,” she said.