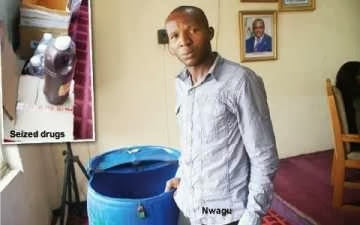 A trader, Chijioke Nwagu, has been apprehended by the National Agency for Food and Drug Administration and Control for allegedly manufacturing and selling counterfeit drugs.

According to NAFDAC, the suspect, who lives on Elemijaye Street, Ajamgbadi area of Lagos State, carries out the illegal manufacture in the toilet of his two-bedroom flat where he mixes chemicals in a
200-litre drum.

Chijioke had been caught after one of his boys, Uzodinma Odoemena, was caught with fake drugs following an intelligence report and surveillance mounted at Alafia, Orile Iganmu, where Nwagu supplies counterfeit Tutolin with codeine cough syrup that he manufactures.Odoemena then led investigators to Nwagu’s house where it was discovered that Nwagu carries out the illegal manufacture in the toilet of his house by pouring different locally-manufactured cough syrup of reputable companies into 200 litres drum and after mixing them, he then dispenses them into empty bottles and labels it as Tutolin with codeine cough syrup.

The Director-General of the agency, Dr. Paul Orhii said:

In his house, we found:

one carton of Dr Nando double 77 keys to power and empty containers of these drugs as well.”
PUNCH Metro learnt that the suspect’s wife, Jane, who was at the house, was also arrested by the agency.
But the suspect explained that he did not plan on selling the goods in Nigeria, saying they were meant for export to Benin Republic.
He said:

“I bought the packaging material of Tutolin with codeine from one Chibuike in China and the product was meant to be supplied to Benin Republic. In the course of my business, I met one Chisom Onwudinjo, who came to my house to see how I manufacture my goods in my house.
“He subsequently agreed to be my distributor and he also accepted that we will not sell the product here in Nigeria.”
Another suspect, Ugbo Collins, who resides in Onitsha, Anambra State, was arrested for importing over 1,000 cartons of fake drugs worth over N54m into the country.
The NAFDAC boss said,

The agency intercepted a 20 feet container imported by NGOD’s Success Ventures. The importer fraudulently gave its name as Lamek’s Global Links Limited on the consignment bill purported to have originated from Pakistan, but investigations revealed the real name of the importer and that the goods came from China.
Investigations revealed that Collins from Onitsha contacted one Larry Amah to clear the consignment for him. Amah in turn, sub-contracted the job to one Okey, an employee of Ocean Star Shipping Company.
The container was impounded and counterfeit pharmaceuticals worth N54, 702, 500 were discovered in the container. Some of them include 348 cartons of Strepsil Tablets; 34 cartons of Augmentin Suspension, eight cartons of Disprin Tablet, 99 cartons of Septran Syrup and 20 cartons of Bonjela.

Others include 126 cartons of CaC-1000 Tablets, 92 cartons of Cicatrin powder, four cartons of Mydriacyl Eye Drop, seven cartons of Glucophage Tablet, 27 cartons of Nystatin, 11 cartons of Apmiclox Suspension, 246 cartons of Dettol Antiseptic Liquid, 22 cartons of Optalidon Tablet, 28 cartons of Encephabol Liquid and 23 cartons of V-tab.” The suspect, however, said he did not know that the products were fake, adding that he had even been administering the drugs to his children.

“I have four children and they all use the drugs. I even give my seven-month-old baby. I was told that the goods were from Pakistan, I did not know they were from China,” he said. Orhii urged members of the public to continue to give the agency useful information that could lead to the arrest of drug counterfeiters.