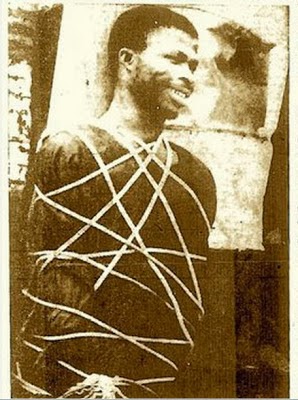 ‘Doctor’ Ishola Oyenusi is a name etched in the history of Nigeria as one of the most violent armed robbers, a criminal who unleashed boundless terror on many Nigerians. But who was he and what did he do that his name was associated with so much notoriety?


The Nigerian Civil War had just ended in 1970 but by the early 1970s, a stone-hearted armed robber, Ishola Oyenusi (he called himself Dr. Oyenusi even if he never finished the secondary school), was terrorising all of Lagos, Nigeria’s largest commercial centre. Before one tale of his daring exploits died down, another one had sprung up.

Oyenusi was no ordinary pilferer, this snitcher was downright wicked and had all the self-confidence in the world to go with it. And you know something? He was quite romantic and chivalrous. There was a story of how he snatched his first car on Herbert Macaulay Road in Yaba, Lagos. Why? His girlfriend was broke. He eventually sold the car for N400 but the sad part was that in the process of stealing the car, the poor owner was shot dead. He actually snatched the first car he saw on the road. Such was the ferocious nature of his audacity.Oyenusi’s arrogance was also legendary. In 1970, he was arrested and handcuffed by a police officer. As the policeman was ordering him around, Oyenusi blasted him and thundered:


‘People like you don’t talk to me like that when I am armed. I gun them down.’

Hmmm, but that was not all. Oyenusi was so feared that when the famed movie director, Chief Eddie Ugbomah made a film titled The Rise and Fall of Dr. Oyenusi in 1977, there was no one bold enough to come forward to act the role of the armed robber because they feared his members would show them shege. Ugbomah had no other option but to act the role himself with the feature film depicting the senseless violence of armed robberies and the absolutely atrocious manner by which lives of innocent Nigerians were snuffed out. But there was one interesting thing that happened: a medical doctor by the name of Dr. Oyenusi was so mad at the film producer that he headed for the court trying to stop the shooting of the movie.

Actually, Ugbomah was threatened. He received a letter from thieves who invaded and looted his provision store, carting away all they could. In the letter, they promised to return his goods if he would only stop shooting the film in which he exposed the support received by the armed robbers from their ‘godfathers’ and even high-ranking officers in the Nigerian Armed Forces. The stubborn Ugbomah called their bluff and went ahead with the 16mm-flick (kindly send us a clip of this film if you have one).

In the 1970s, Oyenusi was no doubt the uncrowned emperor of Nigerian robbers and he is described as the ‘first celebrated armed robber in Nigeria’. He is regarded by some as the pioneer of conventional armed robbery in Nigeria. When Oyenusi reigned at the height of his regal confidence, he declared:


‘The bullet has no power.‘

As at that time, armed robbers were condemned to death and thousands joyfully came out to ‘enjoy’ the grisly public executions before the firing squad on the pristine beaches of Lagos. Although Nigeria no longer has very ‘famous’ bandits and thieves like Anini (at the age of 26, Lawrence Nomayagbon Anini was the most notorious robber in Nigeria), Babatunde Folorunsho, Monday Osunbor, Shina Rambo, Buraimoh Jimoh, Oyenusi, ‘Mighty Joe’, ‘Captain Blood’ and George Iyamu (a former Deputy Superintendent of Police who was Anini’s collaborator), armed robbery is nonetheless a major problem in the nation.

In March 1971, Oyenusi was nabbed by the Nigerian Police after he organized a robbery in which $28,000 (value as at that time) was stolen. They killed a police constable in the process. Although the first public execution of robbers had taken place in April 1971, that of Oyenusi and his criminal allies was a special case and the Lagos government took time to prepare the grounds at the Bar Beach.

By 8.am, officials were already at the execution arena to check the whole place just to ensure that everything went on ‘well’. A combined team of police officers and soldiers struggled to contain the surging crowd of thousands of excited spectators. At about 9.15 am, a team of Lagos City Council workers came to the execution arena with empty mock coffins which they calmly laid behind the execution stand. Obviously, they were there to make fun of a man who had sent so much terror into their hearts. About half an hour later, eight robbers were led to the execution stand… 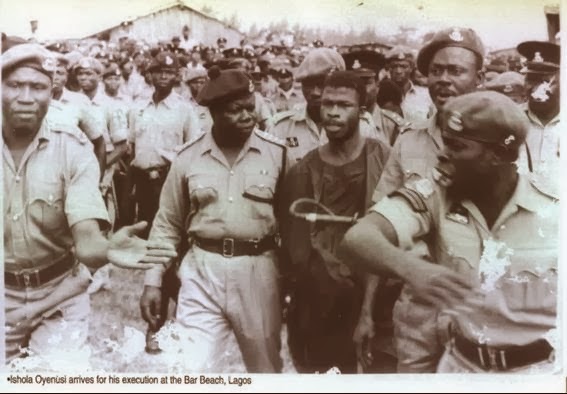 
On the day of Oyenusi’s execution, over 30,000 Nigerians trooped to the famous Bar Beach (armed robberies were quite rare then and when it happened, it was the gist of the town for months so the considerably high level of the people’s curiosity can be appreciated). While some in the crowd jeered and booed Oyenusi and his Gang of Seven, some of his friends and family members present could not hold back their tears. But for most of the witnesses, it was good riddance to bad nonsense. As for Oyenusi, he was smiling, smiling to the last but the agony on his face too was unmistakable. But just few minutes before his body was riddled with hot-leaded bullets from stern-faced soldiers of the Nigerian Army, he finally confessed saying:


‘I am dying for the offence I have committed.‘

Two army trucks and a black van conveyed them to the firing spot. Oyenusi was in the black van. In seconds, three soldiers flew out of the army trucks and proceeded to the black van inside which was Nigeria’s most dreaded armed robber. The soldiers came to a screeching halt and stood at attention by the van. All of a sudden, one of them let out a shrill command! The door was flung open and slowly, Oyenusi appeared from within the darkness of the Black Maria. As if the heavens were in concert, dark clouds had formed over the Bar Beach. He was cloaked in a dark long-sleeved shirt and his hands were tied behind his back. He spotted a pair of dark loafers and his trousers were wrinkled. Sweating profusely, he kept throwing fast glances around as if he was looking for someone as he surveyed the crowd who had thronged the beach to simply see him die.


As the soldiers grabbed and tied him to the pole, he was still scanning through the crowd. One of the giggling spectators in the crowd whispered to the next ‘Who is he looking for?‘. Smartly, seven soldiers formed a lethal line in front of Oyenusi. A soldier let out a fierce command to the sharpshooters. All of them took aim at Oyenusi. The next voice reverberated all over Nigeria:


Like an electrocuted being, his body shook vigorously as he slumped and went limp around the pole that held his remains. 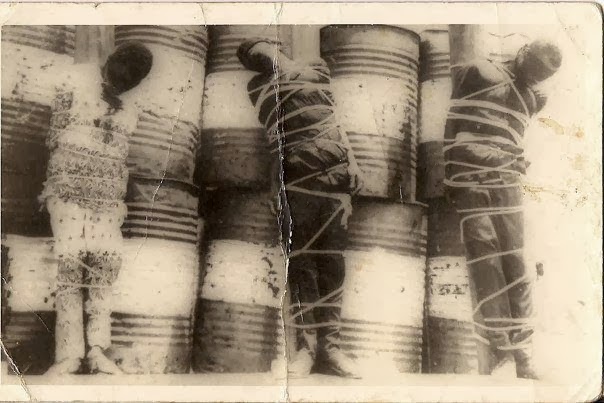 For a man who said bullets had no power to penetrate his skin, he slumped in seconds, surrendering to the high-velocity missiles directed at his mortal vessel. His fragile human body could not withstand the pitiless hail of gunfire, amplified by the metallic drums behind them. Some of the robbers refused the final blessings from the priest while some of them look clearly frightened as the soldiers aimed at them. The basic human instinct of survival betrayed their emotions. Some others shouted their protests and defiance to the last as live cameras of the journalists sent the gory details to those at home watching the spectacle on their black-white television sets. 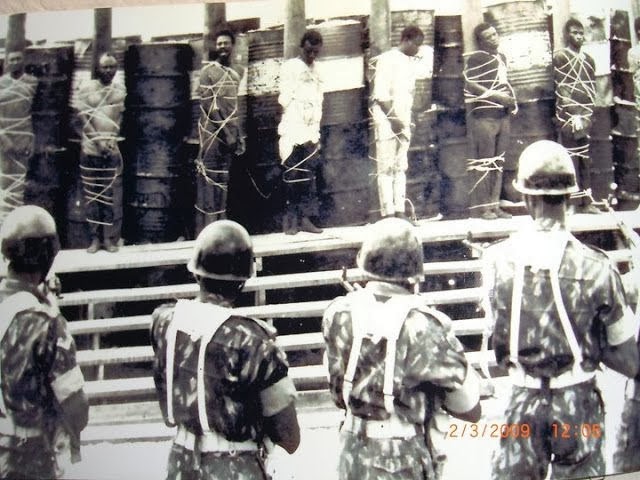 However, Oyenusi, who confessed that he joined the armed robbery business in 1959, was not to die alone. He was to end his journey on earth with six of his other gang members whom he had led to their last robbery at the WAHUM factory at Ikeja, Lagos on the 27th March, 1971. These included:

Amamlaye was a former Personnel Manager at WAHUM where they robbed while Nwokobia was the gateman at the same place. During the robbery, they killed a police constable named Mr. Nwi. An eighth man, Isaac Ekwunife was also executed for robbing a man of a car in Surulere, Lagos in early 1971.


By the time the guns stopped vomitting the bullets, Oyenusi and his cohorts were dead bringing to a total of 70 armed robbers executed after the Nigerian Civil War ended in 1970. As hinted earlier, death by firing squad was the order of the day as at that time. Following Oyenusi’s execution, the Information Officer stationed at the Nigerian Embassy in Washington DC, Femi Davis was interviewed on the matter. He said:


It is the law to shoot persons convicted of armed robbery, that is the robbery with armed violence. The law was passed last year by the Federal Government because we wanted to make it tough for criminals who began preying upon villages and people on the highway looking for easy money.

Oyenusi, the man also known as ‘Dr. Rob-and-Kill’ and his gang met their brutal end at the hands of a 14-man firing squad on the serene Victoria Island of Lagos. According to one of his defence lawyers who visited him while in jail, Oyenusi was imprisoned for the first time when he was 21. He then escaped and was imprisoned again. He escaped AGAIN and was imprisoned AGAIN. He escaped about eight times and then he decided to become an armed robber and that gave him the cloak of invincibility for some time. According to Ebenezer Babatope, former Minister of Transport in his book, The Struggle for Power in Nigeria, Oyenusi told journalists minutes before his death that he would never have become an armed robber if his parents were rich enough to sustain him in the secondary school. He also confessed to taking part in ten major robberies and murders over a period of six years (Africa Research Bulletin, Blackwell, 1971).


Nigerians now travel with fear (some families have even banned night travels) and move with trepidation while the security forces are either too demoralized, outnumbered (which serious nation of 170 million on earth will be policed by 370,000 police officers, does that make any ‘zenze’? Russia with about 143 million people has almost one million police officers equipped with armed helicopters, A-91 rifles, Makarov and Grach pistols, armoured vehicles, police buses, carbines, vans, all-terrain vehicles (where are those ALGON police jeeps Obasanjo bought?)) or under-armed to launch any reasonable counterattack or simply join ranks with the lawbreakers. Hopefully, a time will come when Nigeria will be rid of this vermin called armed robbery (and yeah, pen robbery too).


Trivia: The military government of General Yakubu Gowon approved the public executions of armed robbers. During his regime, the trend of armed robbery was becoming disturbing, a decree was passed, robbers faced the Armed Robbery Tribunal and were promptly shot.


Thanks for your time.