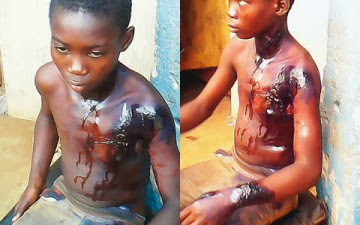 A woman, identified simply as Mrs. Maxwell, has been arrested by the police for allegedly assaulting her daughter, Blessing, with a hot pressing iron.

Blessing, a primary three student of the Lagos Model Nursery and Primary School, Ikeja GRA, was allegedly assaulted last Monday by her mother for licking the baby’s food.

PUNCH Metro gathered that the incident came to light after a neighbour, who lived within the Police College Barracks, Ikeja, with the Maxwells, allegedly called the authorities of the LMNPS to complain about Blessing’s condition. Blessing’s father is said to be a police corporal.A source within the school, who spoke on the condition of anonymity, said, “It was last Friday that we got the anonymous call. At the time, two of Blessing’s younger siblings were in school, so we called them aside and asked after Blessing.

“At first, they were both scared that they would get into trouble with their mother if they told the truth but they eventually opened up and said their mother had used a hot pressing iron on Blessing.”

It was learnt that on arriving at the Maxwells’ house, Blessing was seen sitting outside their flat, sporting burn marks all over her body.

The source said, “We tried to question Blessing about what happened to her, but she was scared of her mother. Eventually, we went into the house and confronted the mother, but she lied that hot water had mistakenly poured on Blessing.

“When we asked if Blessing had received medical attention for her injuries, her mother got annoyed and dragged Blessing into the house. She then refused to answer more questions. Since it was a police barracks, we thought it wise to leave quietly before things got out of hand.

“The most painful aspect of the whole issue is that despite Blessing’s wounds, their neighbour told us that she had been carrying out house chores like before. From what I saw, that girl is so injured that I didn’t expect that she would be able to come to school for the rest of the term. Not one of us guessed that she was being abused at home.”

PUNCH Metro gathered that both mother and child were picked up by officials of the Lagos State Ministry of Women Affairs and Poverty Alleviation after the school authorities alerted the ministry. Blessing was said to have been picked up by a Lagos State Ambulance Service bus.

When our correspondent contacted the Child Director, WAPA, Mrs. Fadairo, she said, “I cannot talk at this time. We are at the hospital and Blessing is in critical condition.”