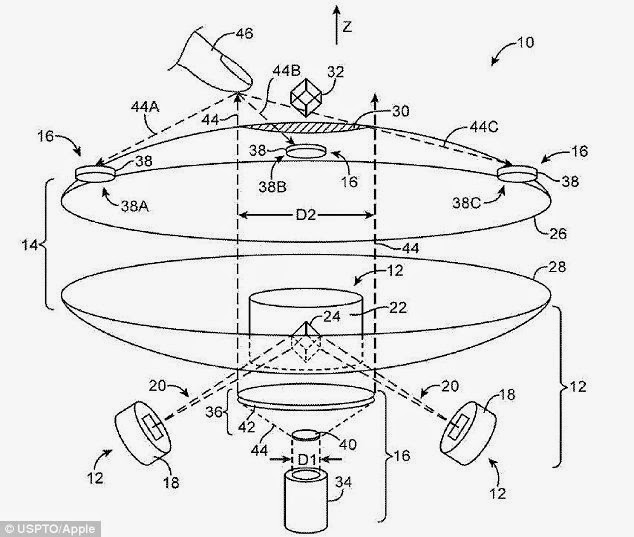 Apple will not kill somebody ooo..they will not kill us ooo! Those guys are freaking geniuses...read this report from Daily mail,


Holograms have featured in futuristic sci-fi films for decades, from Star Wars to Minority Report and Prometheus, but Apple could be about to make the technology mainstream - and small enough to fit in your pocket.


New Apple patent files detail a display that appears to float 3D images, or holograms, above it, and these holograms can then be moved using finger gestures.

The process involves a system that creates the 3D image, an optical system that puts this image into the air, and a touch sensor.The U.S. Patent and Trademark Office published the ‘Interactive three-dimensional display system,’ patent on Thursday and it was found by Apple Insider.

According to the application, the hologram is created using infrared lasers - or similar devices - that project the image onto a surface above the display.

The files said: ‘If desired, there may be one, two, three, four, or more than four projectors in [the] display system.

This projection would then appear via the optical system, which could be situated between two parabolic or concave mirrors that have reflective surfaces facing each other.


When infrared light beams strike an external object, such as the user’s finger, the files explain that the light will be reflected towards a series of sensors.

These optical sensors could include images sensors, cameras or other light-based sensors.

The files also state acoustic-based ultrasonic sensors or capacitive sensors could work to locate and track the movement of the finger so the 3D 'floating' object can be fully manipulated.

Amazon is similarly said to be working on a 3D display for an upcoming device, but its system is slightly different to the one Apple has patented.

Set to be unveiled in June, the device is rumoured to use retina-tracking technology to make images on the smartphone's display appear to 'float above the screen like a hologram and appear three-dimensional at all angles.'