The only home of former Imo state Governor, Ikedi Ohakim has been bombed. The residence of the former state leader was reduced to rubbles by a highly explosive device.

Ohakim who was weeping profusely, stated that he got a call from some security details in the area at about 1: 30am informing him of the tragic incident.He alleged that some roofs were opened from outside the lobby before the suspected hoodlums threw in the bomb. See a pic of the building below....“This is the only building I have in this state, I built it in 1992 when I was a commissioner, now I have to knock at people’s door to have a place to sleep,” he added. 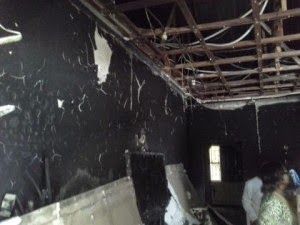