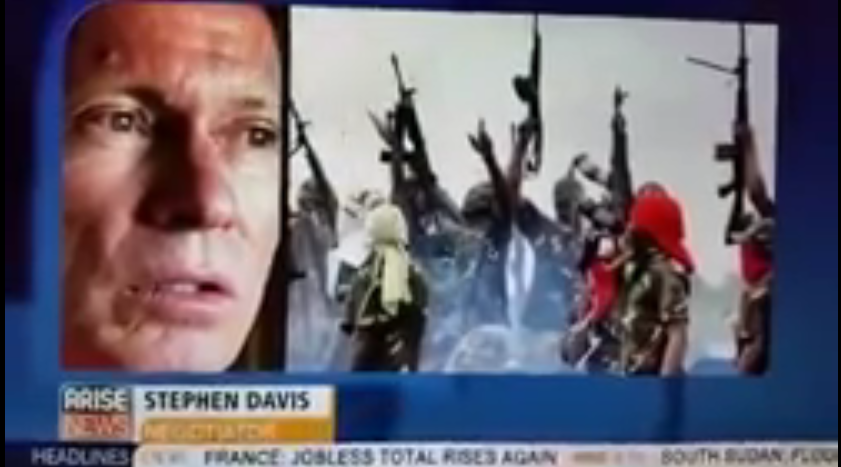 God bless this man for revealing all these.....God bless him! Australian hostage Negotiator, Stephen David has made another shocking revelation that the terror sect, Boko haram was being funded through the central bank of Nigeria.Davis revealed yesterday that Former Borno governor, Ali Modu sheriff and an unnamed Former Military head were sponsors of the dreaded sect.


"One of the biggest of suppliers of arms and military uniforms to the JAS (Jama’atu Ahlis Sunna Lidda’awati wal-Jihad, better known as Boko Haram) currently lives in Cairo, Egypt.(continue)
He is the recipient of money sent by political sponsors from Nigeria. The funds go through the CBN’s financial system and appear to be a legal transaction. Meanwhile, the CBN official who handles the funding is an uncle to three of those arrested in connection with the Nyanya bombings. The three boys lived with him. They were arrested by the SSS (Department of State Security) after the bombings but they do not seem to have been interrogated about their uncle in CBN. Or if they have given up information about their uncle then the SSS has not moved against him." Stephen said.
"Also, a senior official of CBN, who recently left the bank, was very close to Sodiq Aminu Ogwuche, the mastermind of the Nyanya bombings who also schooled in Sudan. Boko haram commanders said Ogwuche’s wife used to visit this top official in his office at the headquarters of the bank in Abuja before the Nyanya bombings. They were very close,” Davis said. He said he is speaking out now because he feels the Federal government is doing little in the rescue of the missing Chibok girls "I have three daughters. I just cannot stand the thought of what those girls are passing through. I have spoken to an escapee who described how she was being raped for 40 days by militants. I can’t stand it. It is heart-breaking. Nigerian authorities must act decisively now,” he said