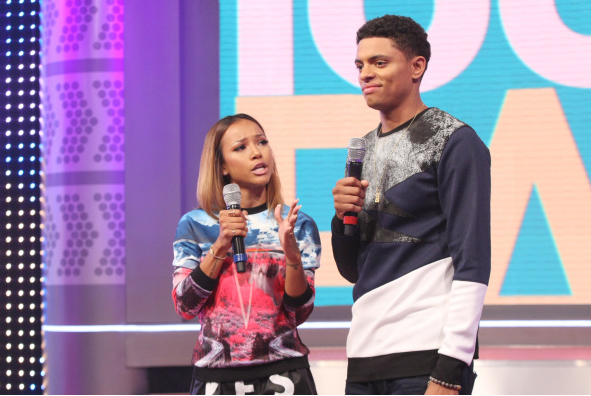 Chris brown's GF, Karreuche Tran set fir to the Beyhive when she cracked a nasty Joke about Beyonce's daughter, Blue Ivy on BET's 106 and Park.KT was a guest host on the show last Monday and did a “Top Six Things Blue Ivy Thought At The VMAs” segment. While reading from a teleprompter, Kae made fun of Beyonce’s 2-year old by saying ‘I really did wake up like this because my parents didn’t comb my hair,”.(continue)

The model got ripped about by Beyonce fans online. Today she broke her silence on the matter by releasing a statement through her Rep, apologizing to Beyonce and Jay for saying such and stating that she was reading from a teleprompter.


Yesterday, Karrueche Tran co-hosted 106 & Park and while hosting the show she made a comment about Blue Ivy’s hair during the segment “Top Six Things Blue Ivy Thought at the VMAs.” In no way did Karrueche mean to offend Blue Ivy or her parents Beyonce and Jay Z.
This was Karrueche’s first time hosting on live television. Although she had been rehearsing the script for days, there was a script change ten minutes before showtime to add coverage of the VMAs and the Mike Brown Memorial. Karrueche had not reviewed the revised script until she read it on the teleprompter.
Karrueche is taking full responsibility for the comment but wants it clear that she would not mock a child, “I am a huge Beyonce fan and I love Blue Ivy. I apologize for the comment and wish I had a chance to review the revised script so that I could have avoided participating in that segment.”
Karrueche admires girls and women who wear natural hair, “I love that Blue is able to wear her natural hair. I laugh when I am nervous and when I registered what I had just said, I of course was taken aback.”