Pic : Mother of 3 nabbed with cannabis at MMIA 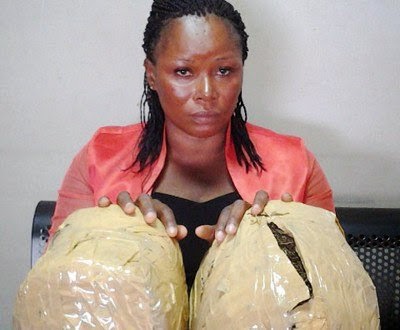 Ezeh Ifeoma maureen, a 37 year old mother of 3 has been arrested by officers of the national drug law enforcement agency(NDLEA) for attempting to smuggle cannabis out of the country.

Ezeh was nabbed with 6.3 kg of cannabis which she concealed as vegetables at the Murtala Muhammed international airport,Ikeja, Lagos. She was planning to board an Ethiopian airline bound for China.

The suspect claims she did not know it was a narcotic drug she was carrying, she said;

“I am a business woman; I sell women’s clothes at the Onitsha main market. I usually export foodstuff to China and import female dresses to Nigeria.(continue) One of my customers in China called to tell me that his brother would give me two parcels of vegetables to bring to him. I collected the parcels at the airport from the boy. Unfortunately, when they tested them, I was told that they contained cannabis.”

If she had successfully boarded that flight, she would have been killed in China for drug trafficking.