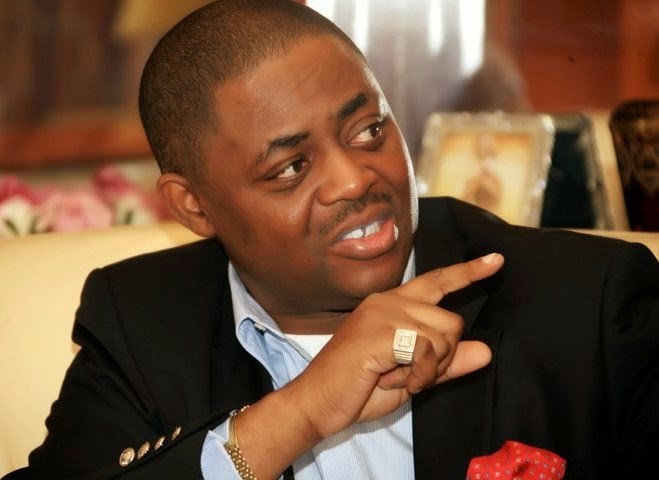 I read the grave allegations made by an Australian by the name of Mr. Stephen Davis about those that he believes are behind Boko Haram. He made some very serious allegations, he mentioned names and I would be interested in seeing the hard evidence that he claims to have.(continue)


I have always said that I believe that anyone, no matter which political party that person belongs to and no matter how highly placed or powerful that person may be, that is involved with Boko Haram ought to be captured, caged, flogged and brought to justice because I regard such people as nothing but bloodthirsty beasts.

I have also always said that I believe that some of the leading members of the opposition APC are secret sponsors and supporters of Boko Haram and I am glad that Mr. Davis appears to share this view and that he has indeed confirmed my worst fears in his celebrated interview with Arise TV.

Similar concerns have been raised and allegations made about the suspicious nexus, the direct link and the questionable relationship between APC and Boko Haram by senior Members of Parliament in the British House of Commons together with a number of leading Russian and American civil and religious institutions, organisations, commentators and political figures.

It is therefore good news that Mr. Davis has confirmed some of our collective suspicions and fears and that he has decided to come out and tell us what he knows given the role that he played in the negotiations to broker a deal to get the Chibok girls released from Boko Haram. I have little doubt that on the allegation that the APC and Boko Haram are linked Davis is absolutely right.

I am not however convinced about the culpability of one or two of the other people that he has fingered. No-one should be spared if the evidence is really there but I must say that I find the allegation that, for example, the former Chief of Army Staff, General Azubuike Ihejirika, is somehow involved with Boko Haram a little far-fetched.

I say this because firstly the man spent so much of his time, energy, career and resources fighting that same terrorist organisation that he is now being accused of being part of.

Secondly I say it because that terrorist organisation has killed and continues to kill so many of his own officers and men. And thirdly I say it because the man is not a muslim but a christian and I have never heard of a christian helping or assisting an islamist terrorist organisation in their quest to establish an islamic fundamentalist state or ''new world caliphate'' in his country.

This is especially so when that terrorist organisation is committed to wiping out the christian faith itself and killing every christian, every secularist and every moderate muslim in the country. It seems to me that this is an absurd notion and that it really doesn't make any sense but if the Australian has any hard evidence let us see or hear it.

Again I disagree strongly with the leading figures in the opposition that have said that the Federal Government and the PDP are the ones behind Boko Haram. I say this because those individuals know very well that the APC as a party have far more sympathy for Boko Haram and far many more of their leaders and members have spoken up for and in defence of Boko Haram than anyone else.

On Friday 29th August in Thisday Newspaper one of those leaders said that the Senator from Borno state that was facing terrorism charges was ''a PDP member''. This is not true. The Senator that he was referring to is Senator Ndume and he is in the APC and not the PDP.

Quite apart from that certain things need to be noted. Let me remind those that are pointing fingers at the PDP today that It was not a member of the PDP or the Federal Government that said that Boko Haram should not be proscribed as an organisation, even after they had slaughtered no less than 15,000 innocent Nigerians in cold blood, sometime last year. It was rather the official spokesman of the APC, Lai Mohammed, who said so.

It was not the PDP or any member of the Federal Government that told the world only last year that they were against the declaration of a State of Emergency in Borno, Yobe and Adamawa states, that an attack on Boko Haram was an attack on the north and that Boko Haram members ought not to be killed but rather they ought to be pampered, granted amnesty and treated in a gentle manner like the Niger Delta militants. It was the leading Presidential aspirant and one of the two co-owners of the APC, General Muhammadu Buhari, that said so.

It was the same General Buhari who has openly identified with and publiclly endorsed a number of the core objectives of Boko Haram when, as far back as 2001, he told the world that he wanted to ''spread sharia all over the country'', when he said that ''muslims should only vote for those that would protect their interest'', when he asked ''why should it concern christians when muslims chop off the limbs of one another'' in accordance with their divine law and when he said, in 2013, that there would be violence and that ''the blood of the dog and the baboon would both flow'' if the coming elections were rigged.

It was not the PDP or a member of the Federal Government that told the world three years ago that if President Goodluck Jonathan or any southerner emerges as President in 2011 that ''we would make the country ungovernable''. It was Alhaji Lawal Kaita, a leading member of the APC, that said so.

It was not the PDP or any member of the Federal Government that guaranteed the security of the Chibok girls and insisted that they should go ahead and do their exams at Chibok and that he would provide the necessary security, even after WAEC and the Federal Ministry of Education had written him a letter and warned him that it would be dangerous to do so and that he must not go ahead.

It was the Governor of Borno state, who is a leading member of the APC, that did that. Not only did he not provide the promised security but he also abandoned the girls and left them in the lurch because only one adult, the school gateman, spent the night in the school with those girls despite all the obvious dangers.

Worst still there was no electricity and no generator functioning at the school throughout the night and neither was there one adult, teacher or supervisor with the girls at the school.

Even more suspicious was the fact that not one of the daughters of any of the staff and teachers that attended that school spent the night with the other girls at the school that night. They were all in the safety of their homes. One wonders why? Was it just a coincidence or did they have prior notice of the impending doom?

The whole Chibok episode is still clouded in mystery but given the fact that the Governor of Borno state is now one of the leading members of the Bring Back Our Girls campaign I wonder why he allowed all these lapses to take place and why he behaved in this way?

Was his motive for not taking all reasonable measures to protect those girls political? Is there not more to his actions and inactions than meets the eye? I repeat my constant assertion that Boko Haram is the military wing of the APC and that the APC is the political wing of Boko Haram.

I make this grave and very serious allegation partly because of the aforementioned public utterances and actions of these leading APC members and partly because of a number of other things that I will not say publiclly because Nigerians would be utterly traumatised if they heard them.

There would be an uproar in this country if some of us were to say all that we know about the irresponsible and insidious religious agenda that the APC has and the hideous and shameful things that they are doing and saying behind closed doors.

The suggestion that they never had a plan to have a muslim/muslim ticket is a lie from the pit of hell. They may have dropped that plan now due to the fact that ii has generated a good deal of public uproar and outrage but that was their original plan and many of them were hell bent on it and probably still are.

If anyone has any doubts about that they should just scrutinise the religious composition of both their old and defunct Interim National Executive Commitee and the new one and they will see that it is virtually an all muslim affair spiced with a few token christians lurking in the shadows and acting as fronts.

Nigeria is a multi-religious, multi-cultural and multi-ethnic secular state and it is exceptionally dangerous to introduce religion into politics and seek to use it to gain political power as the APC are shamelessly doing.

The suggestion that some of their more notable leaders often make that the PDP is linked to Boko Haram in any shape or form or that President Goodluck Jonathan, the Christian Association of Nigeria (CAN) or the High Command of the Nigerian Military, Securiy Agencies and Intelligence Services are sponsoring or supporting Boko Haram is another lie from the pit of hell.

For anyone in the APC to make such an allegation is not only absurd but it is like the pot calling the kettle black. It was rather elements in the APC, and none of those in PDP or any of those organisations that worked day and night to ensure that America did not label Boko Haram a terrorist organisation throughout last year and up until early this year.

This is after the terrorists had killed and abducted so many young and innocent Nigerians. Now the question has to be asked, why was this so? If the APC were not behind Boko Haram why did they not want them to be labelled as terrorists by the Americans and the international community?

Why did they complain morning day and night that the Nigerian military were killing ''innocent northerners'' and ''violating human rights'' simply because our brave soldiers were risking their lives on the war front and battlefield fighting terror, trying to protect our people and trying to wipe out the enemy.

Some have cited the former National Security Advisor, General Patrick Azazi's comments as evidence of PDP's so-called involvement with Boko Haram. They conveniently forget that the elements that Azazi was referring to at that time have now all left the PDP and have now joined the APC.

We do not need any more lessons, finger-pointing or self-serving statements from leaders of the APC or their party about Boko Haram. What we need and what we want from them is for them to stop supporting and encouraging the terrorists and to stop bringing religion into politics.

They should also apologise to the Nigerian people for the shameful things that they have said which has done nothing but encourage the terrorists and the enemies of our people. May God grant them the grace and humility to do so.