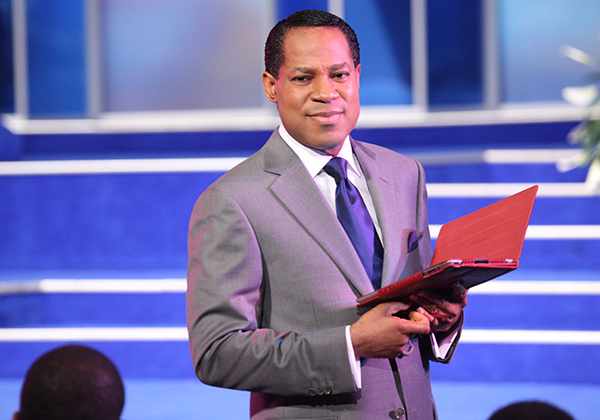 Pastor Chris Oyakhilome has 'lawyered up' seriously for a divorce showdown with his wife, Anita in court.

According to the Cableng,in April, his wife, Anita, had filed for divorce at Central Family Court, High Holborn, London, UK, on the grounds of “unreasonable behaviour” and “adultery” (inappropriate relationships with members of staff). The charismatic pastor strongly denies charges of adultery and has now resolved to engage the services of reputable family lawyers to launch his defence.

TheCable was unable to ascertain the names of his would-be legal representatives, although they areexpected to come from the UK since the wife also engaged the services of a British law firm, Attwaters Jameson Hill Solicitors. It is yet unclear the position to be taken by Oyakhilome on the case ─ either to stall the divorce or to stop the wife from getting hefty alimony.

“The pastor is sending mixed messages all the time. We honestly don’t know his mind yet,” a pastor with the church told TheCable in Lagos, citing instances of Oyakhilome getting angry over his wife’s action and other instances when he appeared conciliatory, seeking that she should retrace her steps and return to her matrimonial home.

Oyakhilome had got wind of his wife’s divorce moves as far back as February this year and tried to stall, but she still went ahead to file the case in April. For two months, he avoided being served the court papers but was eventually tricked into accepting service by the wife’s lawyers who went to visit him at his London hotel incognito.

Although the marriage was contracted in Nigeria, Anita might have chosen the UK for the divorce because that is where she resides and Western courts are known for their strong stand on family issues. If the case ends in her favour, she could get alimony of up to 50% of Oyakhilome’s assets, which include hotels and real estate in many countries.

Under the divorce process, he is expected to file his response to the wife’s allegations and state grounds under which he thinks the marriage should not be dissolved. He could also try to prove to the court that the wife does not deserve significant alimony because of the circumstances of the case.
At the time of writing, he was yet to file his defence, according to sources in the know.

Anita’s lawyers may now be forced to ask for the next step ─ which is the actual dissolution of the union ─ if Oyakhilome’s lawyers keep them waiting.

After reports of the divorce suit were published, an angry Oyakhilome reportedly spoke with members at the London headquarters via a conference call asking those who wanted to leave the church to feel free to do so.

The troubled marriage appeared to have finally broken down last year when Anita stopped ministering at the London headquarters, which she presides over along with other churches in Europe. She also stopped contributing to Rhapsody of Realities, the highly successful Christian daily devotional which is sold around the world and is a major source of income for the couple.

The devotional, which is written in 550 languages and is currently distributed in 242 countries, is on course to reaching 300,000 cities across the world with 100million in 2014, according to the official website.

Much has been read into the removal of Anita’s name from the devotional after the news of the divorce proceedings went public. A member of the church in the UK told TheCable that Anita was complaining that retaining her picture and profile in the booklet was creating the wrong impression that she was still contributing to it.

Unconfirmed reports said she ordered the latest edition to be confiscated in London because it was still bearing her image and she had not been paid any royalties since last year.

Christ Embassy is one of the biggest denominations in Nigeria, with branches all over the world.
The marriage is blessed with two daughters.