Amid the confusion and turmoil that trailed yesterday’s  plane crash, former president Olusegun Obasanjo, was thrown into temporary shock yesterday when the rumoured death of his son, Gbenga also got to him.

Obasanjo who was in Abeokuta, was having a photo session with primary schools pupils, who had attended a leadership training programme for young leaders at the Olusegun Obasanjo Presidential Library (OOPL), Abeokuta.

And the attention of journalists covering the event was drawn to the sudden changes of the former president’s countenance that showed something was wrong after many calls poured in for him during the session.

Obasanjo was seen shivering and shaking shortly after he received the rumoured  news.

During  the conversation with his caller, which lasted afew seconds, Obasanjo, who was apparently disturbed asked his caller in Yoruba “Gbenga wo; o wa ni Abuja’’  (which literarily means which Gbenga?”He is in Abuja).

He ended the conversation, managed to pose for  pictures and minutes later, whispered into the ears of  Prof. Akin Mobogunje, the chairman of the Centre for Human Security of the (OOPL), who organised the ceremony and they left. 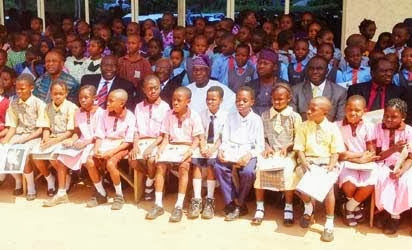