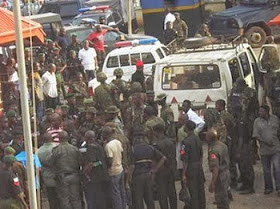 Yesterday Tuesday 26th of November, four persons, including two uniformed policemen and a road-side vulcaniser, died in a fatal motor accident involving the convoy of a bank bullion van and other commercial vehicles.

The sad event occurred around at the New Auto Tyres Market area of Nkpor in Onitsha. The accident which involved five vehicles, including two Mack trailers, bank bullion van, Toyota Hilux van escorting the bullion van, a Mercedes 911 and a Chevrolet bus, was said to have resulted when the bullion van’s tyres burst open, whilst it was on high speed, the driver lost control of the vehicle and hit a moving Mercedes Benz 911 lorry, forcing it to fall into the drainage. However, before the Mercedes Benz 911 fell into the drainage, it hit a stationary trailer which hit a Chevrolet bus.
The Hilux van conveying some of the policemen escorting the bullion van, whilst trying to dodge the bullion van that had lost control, hit the back of a stationary Mack trailer packed by the road and smashed the front of the vehicle, killing the two of the policemen on the spot and leaving others in critical conditions.
The bodies of the deceased have since been deposited at the mortuary while the injured were taken to a nearby hospital for medical attention