Governor Oshiomole apologizes to widow he made vile comments at 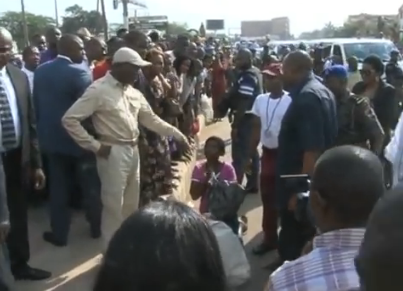 First of all, i would like to apologize for not reporting this...Governor Oshiomole was attacked yesterday by Nigerians in diaspora for his wicked comments to a poor widow who begged and pleaded with him not to destroy her wares which she sold by the roadside,thus violating environmental laws.

Oshiomole allegedly told her to go and die. This occurred during an inspection tour on Mission Road, in the state capital,Benin. He has however apologised.


He stated that he regretted the comments which had become the subject of discourse in the social media.
The Governor, however, noted that he made the comments in anger.
Oshiomhole’s apology was made when the leadership of the Federation of Muslim Women’s Association of Nigeria (FOMWAN), paid him a courtesy visit in Benin.

He noted that though the challenge of modern times had bestowed on the shoulders of some women and single mothers the status of bread winners of their homes, such should not be used as an accuse to flout the laws.