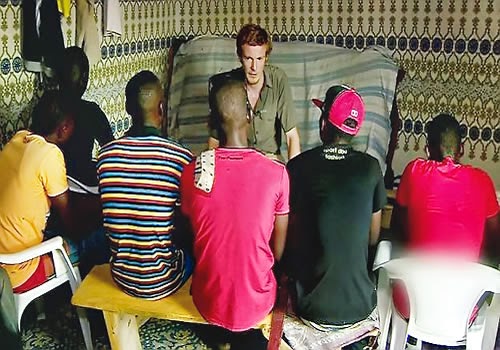 Guys, please read this interview from beginning to the end......and also watch a video after the jump.

YOUNG Nigeriens at the border town of Nigeria and Niger Republic, Diffa, have confessed to be recruits of the Islamist militant group, Boko Haram.A member of a gang in Niger told the British Broadcasting Corporation (BBC) that Boko Haram Islamist militants from Nigeria “regularly come across the border, looking for recruits.”
The gang members, in their 20s, said they were paid $3,085 (about N500,000) to join the insurgency and since they were jobless, they were willing to take the cash, but with no interest in protecting Sharia law.

However, they said they were willing to strike if given the assignment to do so, as they blamed their decision to join the militant group on their joblessness.

“When they come, we inform them about what’s going on, what the security forces are up to.

“We have no jobs; some of us are still at high school, but we need money. Violence has become a form of work for us.”

These confessions were revealed in a documentary published by the BBC, on Tuesday, after Thomas Fessy, a BBC reporter visited Diffa region in Niger Republic.

BBC made contacts with this local gang, who claimed they collaborated with Boko Haram and agreed.

According to BBC documentary, five of these young Nigeriens said they had already joined the militant Boko Haram sect, while two other members were killed in operations.

In total there are about a dozen gang members in a tiny, dark room, built with local mud-bricks.

When the reporter asked them: “If you are asked to launch an attack here, will you be ready to do that?”

When the BBC reporter asked if they agreed with Boko Haram’s reason for fighting, they answered in unison: “No. We only do it for the money.”

Arriving one by one to meet the BBC crew earlier on a street corner in Diffa, they all wore skinny jeans, bright coloured T-shirts and shiny chains, like those seen around the necks of American rappers on music videos.

Their attitude and brand new clothes made them stand out when they walked down the dusty streets of Diffa.

The fashion style is clearly inspired by Western consumerism rather than Islamist militancy.

“We break into houses for cash; sometimes we beat people for money, we steal their animals so we can eat and then we gather up and take Tramol (an opiate drug), smoke ganja (marijuana) and drink alcohol,” one of the gang members said.

The BBC reporter, giving an account of his experience at the border town, said: “At the Sahara, there is little space to take for covers from the storm at the village, as the first attack by Boko Haram by its militants meant deadly worst times for them to live in the border and the river between Niger and Nigeria.”

He said on either side of the border, people had enjoyed strong links for centuries, sharing ethnicity and culture.

The report said Nigeria’s neighbouring countries, Niger, Cameroon and Chad, were fearful that the group’s insurgency might spill over to their borders.

A resident told the BBC that the area was just three kilometres away from Nigeria, expressing his belief that the border would keep them safe for now.

On Lake Chad, according to the documentary, Nigerians were fleeing by boats, as the reporter quoting from a United Nations (UN) report, said the UN estimates that 500 people crossed into Niger from Nigeria every week.

One of the refugees, Mutala Suleiman, who arrived last month with his two wives and six children, narrating his story, said: “We were almost going to bed that night when we heard the gunshot.” We ran to escape. A little girl was shot as she fled the burning house.”

He said he counted 50 dead people on the streets during the last attack.

The Diffa area, according to BBC reporter, was suffering from growing refugee crisis without camps and the authorities argued they could become new targets or worse, recruitment centres for Boko Haram.

He stated in the documentary that “Boko Haram insurgents have shown they can hit the Nigerian state in different ways. While raiding villages, attacking schools and abducting children.

To check against possible attack, the threat, according to the report, means daily patrol across the borders and several attacks have been foiled over the last months, while dozens of men suspected to be linked with Boko Haram had been arrested.

“We know that Boko Haram members come across the border, but we are watching them closely,” Diffa government representative Inoussa Saouna said.

“Just last December, we arrested two dozens of men — we believe they were planning to kidnap the regional governor, the military zone commander and myself,” he added.

Military police, customs officers, as well as national guards conduct daily patrols along the porous border to mitigate the threat.

The border town
On paper, the border is supposed to be secured by joint patrols with soldiers from both countries. However, they are yet to start.

Niger’s security forces are receiving training, logistics and intelligence support from both the United States and France.

Most of the border between Niger and Nigeria is naturally drawn by the Komadougou Yobe River.

On either side of it, people have enjoyed strong links for centuries, sharing ethnicity, culture and living off the cross-border trade.

At the Bosso border point, many people cross on foot through water knee-high as the river is at its lowest level in the hottest month of the year.

It allows motorbikes and cars to drive through easily too.

The many lake islands are now home to thousands and a lot of people, like Mourtalla Souleymane, have made it to the trading post of Krikri on Niger’s shore.

But how many more people can one of the poorest countries in the world take in? Borno State has a population of five million 10 times more than Niger’s Diffa region.

The UN refugee agency said it would try to build new homes and expand existing neighbourhoods rather than setting up camps.

In a report published this month, the Brussels-based think-tank International Crisis Group noted that Boko Haram has “resorted to forced conscription and recruiting criminals and thugs, paying them for attacks.”