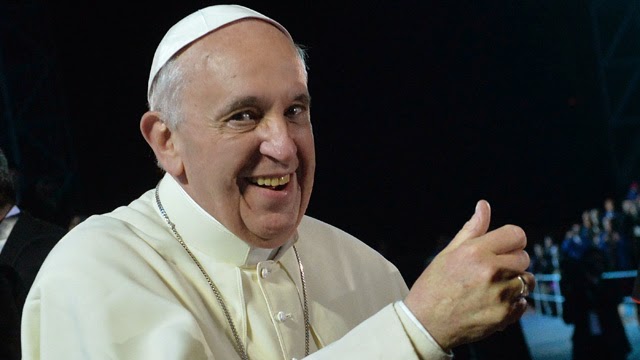 The people's Pope in an easter message/prayer session held at the Vatican tabled Nigeria's case before God.The kind hearted man of robe, prayed that the Boko haram Insurgency in the Northern part of the country should come to an end.


"We beg for … a halt to the brutal terrorist attacks in parts of Nigeria,” he prayed.

This is coming after a suicide bombing at Nyanya motor park in Abuja claimed 75 lives last week. Apart from that, 129 pupil girls of Girls Secondary School, Chibok in Borno State have been kidnapped the insurgent devils.The Pope also prayed for the end of acts of violence in South Sudan and the conflicts in the Central African Republic.“Enable us to care for our brothers and sisters struck by the Ebola epidemic in Guinea Conakry, Sierra Leone and Liberia, and to care for those suffering from so many other diseases which are also spread through neglect and dire poverty,”.

He prayed further "We ask you to enlighten and inspire the initiatives that promote peace in Ukraine, so that all those involved, with the support of the international community, will make every effort to prevent violence.”

Francis also prayed that all sides in Syria will be moved to “boldly negotiate the peace long awaited and long overdue”.Since March 2011, Syria has been wracked by a civil war that has cost 150,000 lives and forced millions to flee the country.