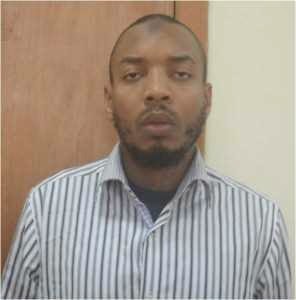 One of the evil masterminds behind the April 14th bomb attack at Nyanya bus station has finally been arrested. Aminu Sadiq Ogwuche, a sleepy-eyed, fairskinned he-devil was arrested in Sudan early today with combined efforts of the Army, DSS, the National Bureau of the Interpol based at the Nigerian Police Force Headquarters and security operatives of Sudan.

Operatives are currently working on his extradiction to Nigeria. Background checks on Ogwuche show that he was born in the United Kingdom, served in the Nigerian Army with Service Number SVC 95/104 but deserted in 2006.He served in the Intelligence Unit of the Nigerian Army at Child Avenue, Arakan Barracks, Lagos between 2001 and 2006, and was posted to the Nigerian Defence Academy (NDA) in 2006.

He is a student of Arabic Language at the International University of Africa, Sudan and hails from Orokam, Ogbadibo LGA of Benue State.