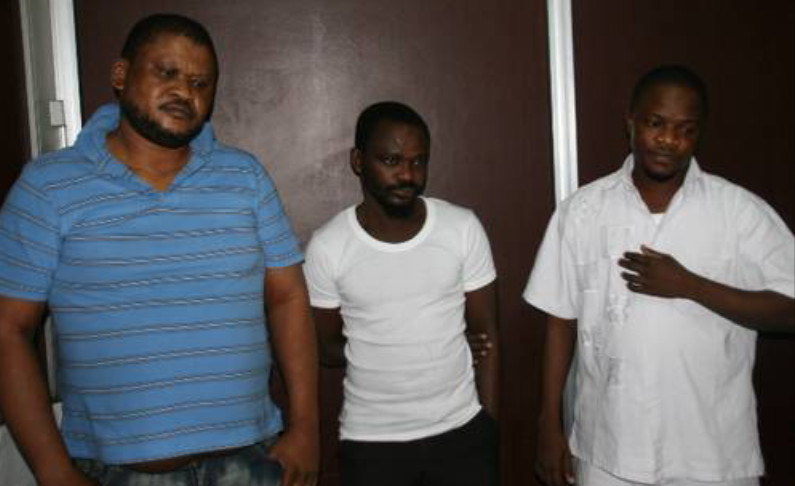 The EFCC has arrested 3 men for attempting to steal funds from Enterprise bank by hacking into its systems using Keelog Key grabber.


Operatives of the Economic and Financial Crimes Commission, EFCC, have arrested a syndicate of scammers for attempting to defraud Enterprise Bank Plc. Ola Lawal, Olumide Kayode and Abass Adekunle were arrested following a botched attempt to compromise the bank’s system and steal depositors’ funds using an electronic device known as Keelog Key Grabber.(continue)

Their arrest was made possible by an insider who revealed to the bank’s management that some fraudsters were planning to gain access to its network, using a device called Keelog Key Grabber.Investigations showed that, a staff of the bank, Owolabi Agboola was contacted by one of the suspected fraudsters, who proposed a business arrangement to him on how to hack into the system of the bank. Agboola subsequently informed management of the bank and he was instructed to play along with the fraudster.

In the arrangement, an electronic device called keelog Key Grabber would be used to harvest passwords of some of the key operation staff of the bank. The grabber was meant to be plugged into the computer system of the Head of Operation of a particular branch, to retrieve information technology configuration settings from the computer system and pave the way for the fraudsters to move customers’ funds out of the bank.

Lawal was arrested while trying to hand over the Keelog Key Grabber to Agboola. His arrest led to the arrest of two other suspects: Olumide Kayode Maborukoje and Abass Ajibade. Items recovered from them include: a keylogger, a laptop, a router, a modem, sim cards, USB keyhole log with a template of keylogger and a jotter containing some account numbers which they intended to use for the fraud.

The suspects would be charged to court as soon as investigation is concluded.