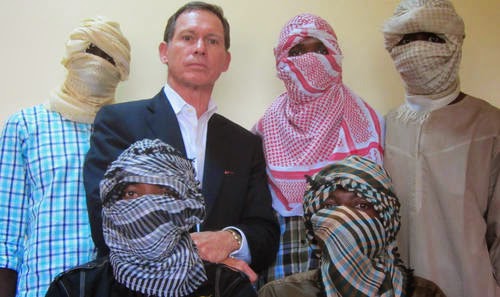 This Stephen Davis guy has guts..and i am happy he is beginning to expose the deep rot in our government. Davis revealed more yesterday about the President's stance on the current issues with Boko Haram.

Davis said that Jonathan was aware of the insurgents’ sponsors and their specific roles. he was unsure of the extent of information currently before President Jonathan. He added that Mr. Jonathan had been weakened by lack of military loyalty and a history of security negligence.(continue)
He gave the example of repeated attempts to bring the growth of Al Qa’eda associated cells to the attention of NSA’s since 2006 only to have them dismiss such reports as baseless. “By the time Goodluck Jonathan became president Boko Haram had become a potent weapon with a command structure embedded in 16 northern states fanned by support from corrupt politicians. This is one of the reasons why I say Nigerians should stop blaming the president for some of these  terrorism problems...the man is trying and there are a lot of untrustworthy people around him.

Davis has repeatedly urged the government to prosecute Ali Modu Sheriff, the former governor of Borno state, adding that he was a primary sponsor of the sect and wonders why the EFCC has not quizzed him over the huge amount of state funds he embezzled.