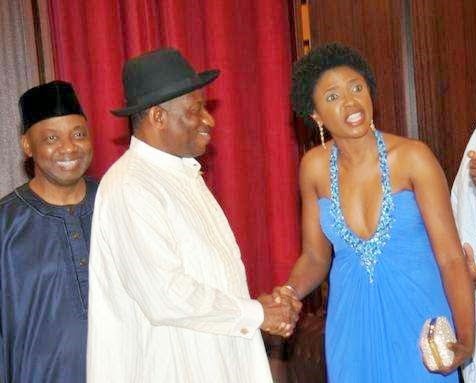 Etcetera is just a funny dude......he has taken a big swipe at actress, Omoni Oboli over the controversial blue dress she wore to the private screening of her movie "being mrs. Elliot" at Aso rock. Some people claimed she did it to get the attention of the president and other politicians.


Remember Monica Lewinsky? If you do, then you should also remember the “Blue Dress” she wore to the white house that got President Clinton, the most powerful man in the world and the then president of the United States of America almost impeached.(continue).... And 16 years on, just when everyone thought the seductive blue dress has been locked away in a highly secured vault somewhere at the pentagon, it reared its dangerous head at Nigeria’s presidential villa, worn by a nollywood actress for her movie premiere. Only this time, it was seductively patterned as a strip wear.

Is the second donning of the dreaded blue dress a decoy to seduce another president? This time around, the president of the most powerful black nation in the world. Well, your guess is as good as mine. I can still remember being glued to my laptop trying to make sense out of the picture of our president shaking hands with “The lady in blue”, with a larger part of her cleavage exposed for the world to see. It got me wondering how anyone dressed in such a manner could have been allowed anywhere near the presidential villa for any reason. How did she get past security?

The habit of indecently dressed nollywood actresses tiptoeing around the presidency should not be permitted. The presidential villa is no place for a movie premiere, neither is it a place for a dress rehearsal of any sort. And as far as I can remember, the federal ministry of tourism never issued any statement declaring the presidential villa a tourist site. So please take your sliced gowns and facial foundations elsewhere. After all there’s been no complaints about the architectural foundation upon which the presidential villa stands. Let us stop distracting the President from his constitutional duties unnecessarily. Leave him alone to concentrate on more pressing matters of state. His constitutional duties do not revolve around entertainers. I can’t see how premiering your movie at the presidency serves this nation?

It is a no-brainer that the president needs time and space to concentrate and fulfil his elective duties, but I find it baffling that some entertainers don’t seem to understand what distractions are? And If you reasoned, your movie will help pull the country’s head above the parapet, why not have it screened at a pubic cinema to the benefit of all? Please for the love of this country, keep the vanity fair and celebitchy attitude away from the presidency. We always take things to the extreme in this country. Very soon the musicians will start taking their album listening parties and their musical video premieres to the presidential villa. Can you imagine Angelina Jolie premiering her movies at the White House? The American government will never approve of such.

Isn’t it shameful that the President seems to have become the prerequisite for making movies or holding events in this country? The president’s goodwill and open arms shouldn’t be given misguided interpretations. Stop painting the presidency as a place for extra curricula activities. We need the president’s full concentration at this material time when the country is at war on so many fronts.

There are indeed more pressing matters calling for the president’s attention. The chibok girls issue is still a lingering embarrassment to the nation, while Grand scale corruption is another stigma that is yet to be dealt with. With ebola and terrorism crying to the president for attention, isn’t it extremely insensitive of any individual taking his or her selfish interest to a president that already seems overwhelmed with too many activities?

As a nation, we are at a delicate point. It is up to us if we are to get out of this mess. What Mr. President needs most importantly is our prayers not seduction or distraction.