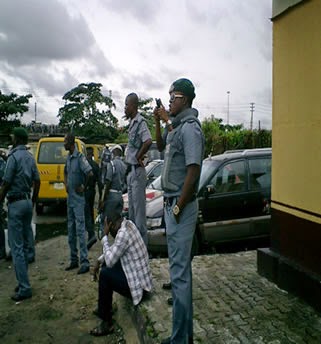 This is according to the official website of the Lagos state traffic management agency (LASTMA), they claim that some officers of the Nigerian customs unleashed terror on them after they arrested a top custom officer for driving one way in Mile 2 lagos.

The statement from LASTMA read;


Crisis erupted at the Mile 2 office of the Lagos State Traffic Management Authority (LASTMA) on Tuesday when some officials of the Nigeria Customs launched a violent attack(continue) on officials of the agency, vandalized four vehicles and destroyed valuables in the offices inside the yard in a bid to forcefully remove away a vehicle that was apprehended for driving in a direction prohibited by Law (one way) at Coconut area of Mile 2, Lagos.

The unlawful invasion of LASTMA office was as a result of the arrest of a Wine Honda Pilot Jeep with registration number EKY 521 CZ believed to belong to a senior official of the Nigerian Customs which was apprehended about 9:15am for driving against traffic and taken to the LASTMA yard. An hour after the arrest a group of custom officials in convoy of three (3) patrol vehicles fully armed with automatic riffle led by an officer who introduced himself as a Deputy Controller stormed the LASTMA yard and inflicted injuries on officials on sight.
An official of the agency Musiliu Edu and a police corporal Saliu Isiaka were severely battered for recording the barbaric act and their phones and camera seized at gunpoint Another official of the agency Wensu Idowu was not as lucky as others as he was hit in the mouth with a gun butt and had to be rushed to a near by hospital for treatment,.
The zonal head, Victor Adeyanju recounted that the officers who were all in uniform stormed the office and demanded for the unconditional release of their colleague's vehicle and we're advised on procedure attached to release of vehicles .This according to him, angered them and snow balled the beating and dragging of officers on the floor and not to leave without the apprehended vehicle.
An eyewitness account revealed the pandemonium that ensued when the custom officials started shooting sporadically and held people inside and outside the yard hostage. She added that People were running for safety in different directions for fear of been hit by a strayed bullet. and condemned the act as an abuse of office. It took the concerted effort of the police from Festac police station led by the Divisional Crime Officer Supol Enfanyi and his team to restore normalcy. The custom officers however escaped on the way to the station but one of their official patrol vehicle was apprehended and taken to the Festac Police State while the apprehended jeep has been deposited at the LASTMA Headquarters.
The officers who hurriedly left in other to prevent justice left behind evidences such as bullet shells and a name tag belonging to one of the officers named " AUDU. A.A.
The General Manager lamented the chaotic and behavioral attitude of the officers for disrupting the LASTMA officials from carrying out their duties by invading the zone and attacking them and also appealed to uniform personnel to see LASTMA officials as partners who are out to ensure sanity on the road.