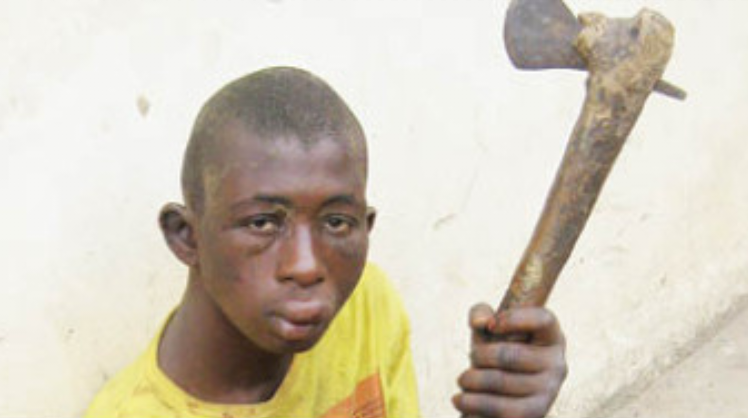 This evil criminal goes by the name, Olalekan Ajibola. He is a notorious armed robber who has terrorised the streets of Mushin, Lagos. Ajibola's main tool for robbery is an axe, which he uses to hack victims who do not cooperate or meet his demands.

He met his waterloo when he tried to rob the house of one Ogungbe, on folarin street mushin. Ajibola had stormed Ogungbe's house at about 3am that day and tried to break the door with his axe.(continue)
The vigilant Ogungbe quickly alerted the officers of Olosan police station, who swiftly arrived at the scene and apprehended the suspect.

Ajibola, who is currently at the SARS (special anti-robbery squad) office in Ikeja, said this to newsmen;


“I do not live with my parents. They are divorced. My father is a commercial driver in Lagos. He shuttles between the Oyingbo and Bariga areas. He also does building contractor jobs. My mother, however, lives in Ibadan. She is mentally sick and is confined to the house. She was formerly a chemist but she stopped working when she fell sick.I learnt to rob while in Oyingbo. When I go out for operations, I carry my axe. I have operated with it on five different occasions. When I enter houses, I ask people for money, phones and other valuables. If they resist, I will hack them with the axe. I use the axe for cutting victims who resist.I was brought up in a hard way. That is why I also don’t dress well. I rob in order to survive. I eat at any restaurant I find myself. I sneak in and out of them to have my meals. My father does not know or care where I am. It was only my mother who took care of me initially.
My father left my mum when her mental sickness started. Since then, I had been wandering around till I got to Lagos. I was learning work before in Ibadan. I also sold clothes. I attended a primary school in Ibadan. That was the only education I had.”