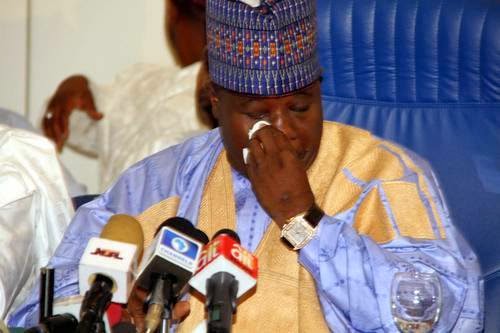 Former Governor of Bornor state is pictired above weeping at a press conference in Abuja today where he denies allegations  of being a Boko Haram sponsor.

Modu-sheriff has been at the center of serious controversy after an Australian hostage negotiator, Stephen Davis who had primary contact with Boko Haram during negotiations, stated that the former governor was a sponsor of the sect.

Sheriff threatened to sue Davis adding that Boko haram had killed his brother, some relatives and are also targetting him. He said that he was ready to face any panel in the world on the matter.