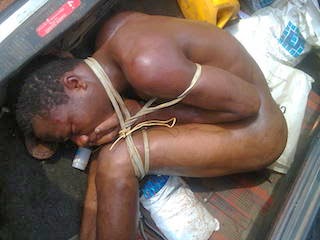 The police in Abeokuta have arrested a man identified as David for allegedly beheading his former boss,Mrs Olufunmilayo Timeyin, a 65 year old ex-magistrate.

This horrible event occurred at Laderin housing estate,Kobape road. The whole trouble started when David was hired 2 months ago and was later fired and arrested by the police for stealing money and jewellery from Mrs.Timeyin.

However, On friday afternoon, this heartless criminal scaled Mrs. Timeyin's fence and laid ambush for her.Immediately Mrs. Timeyin parked her blue Toyota Camry car, David brutally attacked her with a matchete. Her son, Olumide who was with her at the time of the attack, quickly raised alarm that a thief was in their home and by the time some residents of the area came to his aide,The magistrate had been beheaded and David had escaped.


A quick search party was organized by Residents of the area and Shortly after,David was captured. He will soon be charged to court.