PDP strikes below the belt : Accuse APC of Abuja Bombing 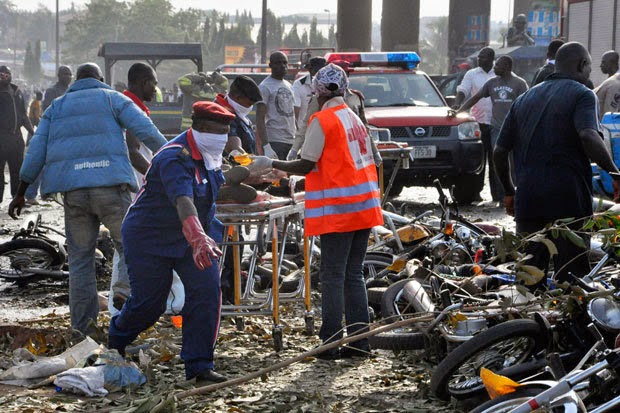 Okay!....another interesting political war has been ignited...PDP has called out APC in a press release yesterday evening over the Nyanya Bombing.

This is not good...at all! people lost their lives yesterday for Christ's sake!.. and instead of consoling bereaved relatives and assuring Nigerians that everything is under control, the situation is being used as an avenue to hurl political attacks....very shameful! .

The PDP weeps. We are indeed grief-stricken. Our hearts go out to the bereaved, especially those who have been orphaned and widowed and those now deprived of their bread winners by this evil act. We share in their pain, their anguish and their loss and pray that those behind their grief must not escape justice,” the party said.
Stating that the attacks cannot be justified under any guise, the PDP maintained that they are politically motivated and can be traced to the utterances and comments of desperate persons who seek to undermine and discredit the present administration and make the nation ungovernable for President Goodluck Jonathan by instituting a reign of terror against the people.

“We stand by our earlier statements that these attacks on our people are politically motivated by unpatriotic persons, especially those in the APC, who have been making utterances and comments, promoting violence and blood-letting as a means of achieving political control. Nigerians are also aware of utterances by certain APC governors which have been aimed at undermining our security forces and emboldening insurgents against the people.
Those who have been promoting violence through their utterances can now see the monster they have created. They can now see the end product of their comments; a country flowing daily with the blood of the innocent.

The question is; how do they feel when they see the mangled and blood-soaked bodies of their victims? How do they feel when they hear the voices of the dying and the injured? Of course they feel nothing. Their hearts have been hardened and they are embittered by the fact that they have been rejected by the people. They are bitter because the people have chosen to rally round the government they love and voted for; but must they chose the path of violence and bloodletting as a response to the wishes and aspiration of the people?” the statement queried.

Urging all well meaning Nigerians to stand up and join President Goodluck Jonathan in his untiring efforts to check terrorism in the country, the PDP cautioned those fueling the attacks to retrace their steps, rid themselves of bitterness and desperation and seek forgiveness from God.The party, in solidarity with the people also shelved all official engagements while praying God to grant the bereaved the fortitude to bear the loss.