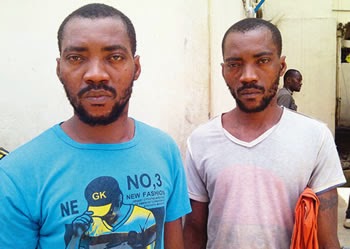 The Special Anti-Robbery Squad in Lagos has arrested a set of identical twins for robbing a factory belonging to Reckitt Benckiser, producers of Dettol.

Police authorities revealed that the duo, Taiye and Kehinde Balogun, were welders and were hired by a robbery gang to break into the firm’s warehouse in May last year.

The robbery gang, it was learnt, robbed the company of soap noodles and chemicals worth N17m.It was learnt that after the robbery, SARS detectives launched an investigation into the case and the prime suspects were arrested in February.
The suspects were said to have implicated the twins who were subsequently arrested.

Kehinde said, “Around May last year, we were called by one guy known as Yankee who lives near our workshop in Agbara. He took us to meet one Deji.

“Deji claimed to be a storekeeper at the factory, saying he had misplaced his key. He took us to the warehouse and said we should break the locks open.

“After breaking the locks, they told us to help them load the chemicals into some trucks. They said they were under instructions to transfer the cartons to another warehouse.

Detectives, however, told PUNCH Metro that investigations revealed that the twins were aware that they were engaged in a robbery operation.

Other suspects arrested along with the twins said the twins had been informed of the operation beforehand.

A policeman said, “When we made initial arrest, the twins claimed they were pawns in the operation and knew little, but when we interrogated the other suspects, they said the twins were just as guilty.

“One of the suspects told us that initially, the twins were not aware but when they told the twins about the plan, they swore to an oath and vowed to cooperate.

“The welders association in the area said a directive was given to all welders that they should not break any lock unless the owner of the property gave direct permission.

“The twins went to a warehouse under the instruction of a purported storekeeper at 8am. They knew about the robbery.”

Police Public Relations Officer, Ngozi Braide, said she had yet to be briefed on the arrest.